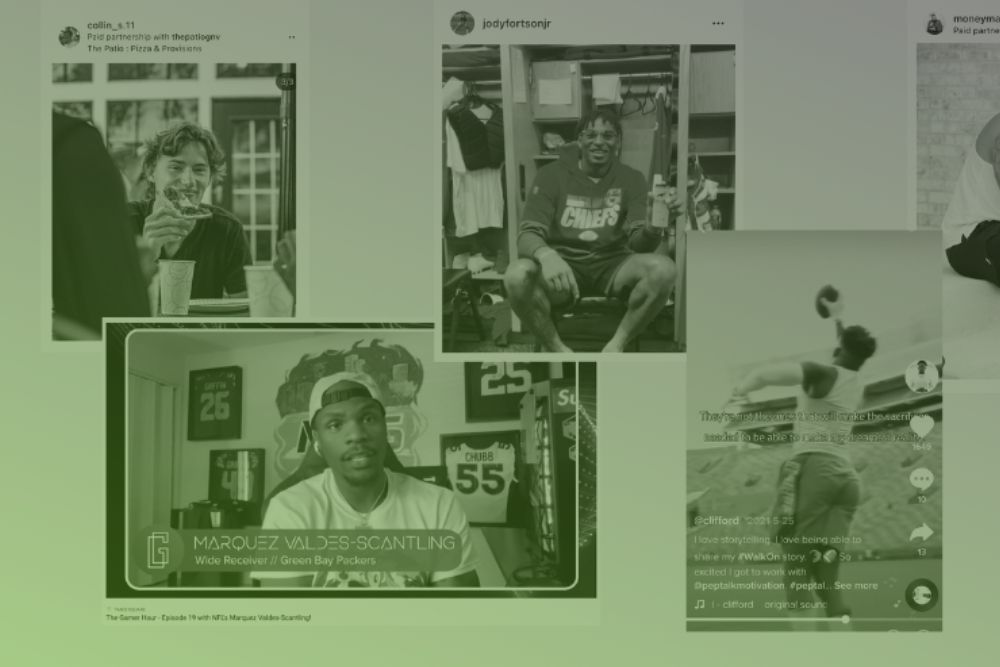 Over the course of 2021, we connected hundreds of athletes and agents with hundreds of brands for sponsorship opportunities. The deals ranged from social media posts to appearances, the brands from fashion to food, and the athletes from globally-recognizable athletes to smaller-following student-athletes.

We put together a list of ten of our favorite partnerships from the year, compiled here. While extremely different, they all share a common trait – the partnership started on MarketPryce.

Breinfuel Locks In With A Lax Duo

The beverage company Breinfuel was one of our earliest clients at MarketPryce, and they made an immediate impact by partnering with two lacrosse players, Bill O’Brien and Joe Nardella. They partnered with the two for multiple social media posts, videos, and testimonials.

Peptalk Motivation, an app that provides motivational speeches for customers, wanted to partner with athletes to create short form video content on TikTok. In addition to others, they chose student-athlete football players AJ Greene and Clifford Taylor IV. Both Greene and Taylor created videos that they voiced themselves, inspiring viewers and encouraging them to check out Peptalk.

With the relaxation and rejuvenation that CBD brings, its no wonder Applied Botanic sought out athletes to promote it. Pro soccer player Katie Johnson and pro football player Marcus Smith did a great job posting, both in photos and videos, about why Applied Botanics is the right choice for their followers.

As a media company that wanted to work with athletes, Esportz Network utilized MarketPryce to book guests for their YouTube show The Gamer Hour. Their team found half a dozen professional athletes to appear on their show, but most notably NBA player Zach Collins and NFL players Marquez Valdes-Scantling and Austin Ekeler.

Energy drink company G.O.A.T. Fuel lived up to their name by setting all-time great records on MarketPryce. After two months on MarketPryce, they closed deals with 100+ athletes and earned more than 1 million + social media impressions in the process. Most of the posts were video or photo testimonials showing the athletes incorporating G.O.A.T. Fuel into their workout routines.

Mask brand Airinum leveraged the voices of athletes (which we love to see) and made a concentrated effort to focus on women (which we really love to see). Female athletes are often underrepresented in marketing and it was great to see Airinum make an effort to correct that. Highlighted here are posts from soccer player Evi Popadinova and volleyball player Paige Tapp.

FiveStar, an app that empowers fans to connect with athletes, wanted to grow its presence by connecting with athletes as ambassadors. By making edits of players in a FiveStar-themed uniform, they made it clear on social media that their athlete team was expanding, leveraging the athlete’s following to drive downloads of their app.

GuardLab Sinks Their Teeth Into Some Deals

GuardLab, a mouthguard brand, new the best way to promote their products was by connecting with athletes, and they did just that. Launching partnerships with student-athletse like Rayquan Smith and Rayquawndis Mitchell, they requested social media posts featuring custom mouthguards.

Our NIL initiative at the University of Florida, MarketPryce Florida, is helping Gator student-athletes connect with local businesses for meaningful partnerships. For our first activation, 25 student-athletes went to The Patio, a Gainesville restaurant, and enjoyed a free meal. The next week, they all posted about it, driving traffic to the store and their social pages.