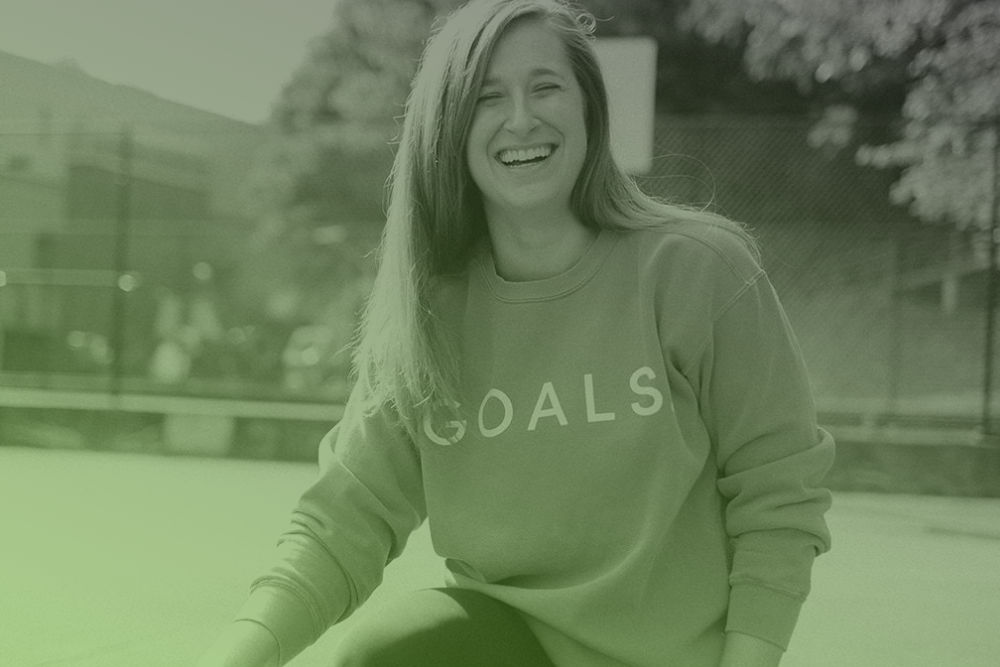 The women’s sports wave is real. While we’re far from where we need to be in terms of compensation and respect for female athletes, the tide is slowly turning. Viewership stats are rising, sponsorship money is flowing a little more freely, and sports fans are beginning to realize these women put in just as much work (sometimes more work) than their male counterparts.

At MarketPryce, we see the interest in female athletes firsthand as the brands on our site look to close endorsement deals with stars of major leagues like the NWSL, WNBA, Athletes Unlimited, and more. Brands who are looking for ambassadors see extreme value in working with a woman in sports.

With the NWSL and WNBA regular season getting underway this upcoming weekend, there was no better time than now to sit down with someone whose passion for women in sports is infectious, Caroline Fitzgerald. Fitzgerald is the founder of GOALS, an organization that shines a light on women’s sports through its social media accounts, newsletter, and podcast. In our conversation below, Fitzgerald discusses her work with GOALS, why we’ve seen women’s sports fandom accelerate, the role of social media, and much more.

MarketPryce: Where did the idea for GOALS start and what did you set out to do by creating it?

Caroline Fitzgerald: Starting GOALS was something that had been on my mind for a long time. I’ve always had a fire in my soul for empowering women through sports. I’m a feminist scholar that works in the sports industry, a life long athlete, and a high school girl’s basketball coach. Athletics, like feminism, has always been at the core of my identity. I have centered my life around sports because I have personally experienced the profound impact that a positive athletic experience can have on young women and girls. The connection between female empowerment and sports is undeniable, and I am a living, breathing example of that connection. Athletics have led me down the path of leadership: I currently work in the sports industry as the Vice President of Partnerships and Runner Experience at the DICK’S Sporting Goods Pittsburgh Marathon, and I’m the Head Girls High School Basketball Coach at Shady Side Academy in Pittsburgh, PA. These experiences on and off the court have allowed me to show up for myself and others.

However, despite all of the data clearly shows that girls who play sports become women who lead, by age 14, girls are dropping out of sports at two times the rate of boys. Why? Because sports – and sports culture – has historically been built by men, for men, and has always centered the athlete as inherently male. Michelle Obama once said that, “…the difference between a broken community and a thriving one is the presence of women who are valued.” By that standard, the sports world is broken. Currently, female athletes receive less than 4% of media coverage. Less than 7% of team owners in major league sports are women, and less than 14% of sports journalists are women. We have a long way until gender equality is reached in the sports world.

Through our work, we aim to empower leaders in women’s sports by giving them the information & tools that they need to change the sports industry for the better. We believe that it’s good business to invest in women’s sports, and our GOAL is to prove it.

MP: It seems like the women’s sports community is really strong and supportive online, which can be a breath of fresh air from social media negativity. How have you seen that play out?

Take the WNBA for example. In 2020, the women of the WNBA used their platform and harnessed the power of the women’s sports community to help get Raphael Warnock elected to the U.S. Senate. Or look at the change Ali Kerschner sparked by posting pictures of the NCAA’s March Madness weight room facilities. Her pictures went absolutely viral once they got in front of the women’s sports community, and the result was better facilities and experiences for the NCAA’s women’s basketball players. Those are just two examples, but I truly believe that when women support other women, there are no limits to the positive change that we can create.

MP: It also seems like we’ve really seen support and appreciation for women’s sports accelerate over the past few years. What do you think are the big reasons for that

CF: Social media has definitely contributed to the massive increase in the support of women’s sports over the past few years. Women’s sports teams, leagues and players no longer need to wait for traditional media and networks to give them a seat at the table; social media has allowed women in sports to build their own tables.

Let’s use the 2021 NCAA Women’s Basketball Tournament again as an example. When the NCAA failed to invest in and market their women athletes on the same level as their male athletes, the women’s sports community was able to hold them accountable through Twitter, Instagram, and TikTok. Sedona Prince’s TikTok video of the weight-room disparities generated 300 million impressions, and almost 1 million engagements. Women in sports clearly know how to harness the power of social media. We are social media savvy and proven marketers because we have to be.

Additionally, online streaming platforms are doing something that traditional networks have never done before: they’re regularly showing women’s sports. Platforms like Twitch, Paramount+, Twitter, the WNBA’s League Pass, and others have made it so women’s sports can consistently be watched by fans. What we’ve found in these last few years is that when women’s sports are accessible, people will watch, and streaming & social media platforms have finally allowed fans to access women’s sports content.

MP: Your podcast, the Business Case for Women’s Sports, breaks down why supporting women’s sports is not only the right thing to do (ethically and morally), but it makes sense from a business perspective. What have you learned since its launch that you’d want to share?

I knew at that time that it was good business to invest in the product of women’s sports, but what I’ve learned is that the potential for the growth of women’s sports is virtually unlimited because we have the most dedicated, brilliant, and thoughtful leaders working to change the game. The women that we have steering the ship are the best minds in the industry, and under their leadership, we are headed for amazing things.

MP: On your site, one statistic stuck out to me in particular: Female athletes receive less than 1% of endorsement dollars, which is something we’re really looking to even out at MarketPryce, making athlete marketing accessible to all. What would you say to a brand on MarketPryce (or any brand) about the benefit of working with female athlete ambassadors?

In 2020, WNBA Commissioner Cathy Engelbert said something that has stuck with us. She said, “If these two facts are right – 84% of sports fans are interested in women’s sports, and women control 85% of US spending power – we should be able to really transform the way women’s sports are valued.”

Women’s sports are a largely untapped market with high growth potential, and brands have so much to gain by working with and investing in women athletes.

MP: Something that has been really encouraging is seeing the way many male athletes are leading by example and have stuck up for the fact that female athletes deserve the same amount of respect. How do you think other men (athletes and non-athletes) can do the same?

CF: The responsibility of fighting against sexism should not fall entirely on the shoulders of women. Women did not establish the patriarchy, men did. If we’re going to create a world that values women as much as it values men, more men need to get in the fight. And while there are men that are doing good work to advance opportunities for women, we need more male allies that are actively fighting against sexism in the sports world.

MP: At MarketPryce, we love to say that the era of “Shut Up and Dribble” is over…aka we want athletes to speak their minds, to be human and to take a stand for what they believe in. This seems especially present in women’s sports. How do you think this ties into marketing and business?

CF: In 2020, we saw a rise in athlete activism and a rise in consumer interest to spend with socially responsible brands. But athlete activism is not new to women in sports. As Nneka Ogwumike and Sue Bird wrote, “By simply existing in spaces that weren’t built for us, women athletes are doing something revolutionary.” Every time a woman shows up to participate or work in sports, she is fighting for a place in a world that was not meant for her. Sportswomen have always been activists because they’ve always had to fight for more of the sports industry pie. The stories are all too common: pay gaps on & off the field, exploitation, lower endorsements, poor facilities, minimal acknowledgements, lack of coverage; the list of forces fighting against women in sports is endless.

With that in mind, it is no coincidence that in a year when women in sports stood up to racism, sexism, homophobia, pay inequity and more, we also saw recording-breaking investment in women’s sports. Secret and Budweiser invested big with the NWSL, Glossier becoming the first beauty partner of the WNBA, Discover and DICK’s Sporting Goods signed as partners of the NWHL, to name a few. The way that women in sports stand up to toxicity is one of the core reasons why brands will spend with women’s sports. As consumers demand more social responsibility from brands, brands would be wise to align themselves with women athletes against sexism in the sports world.