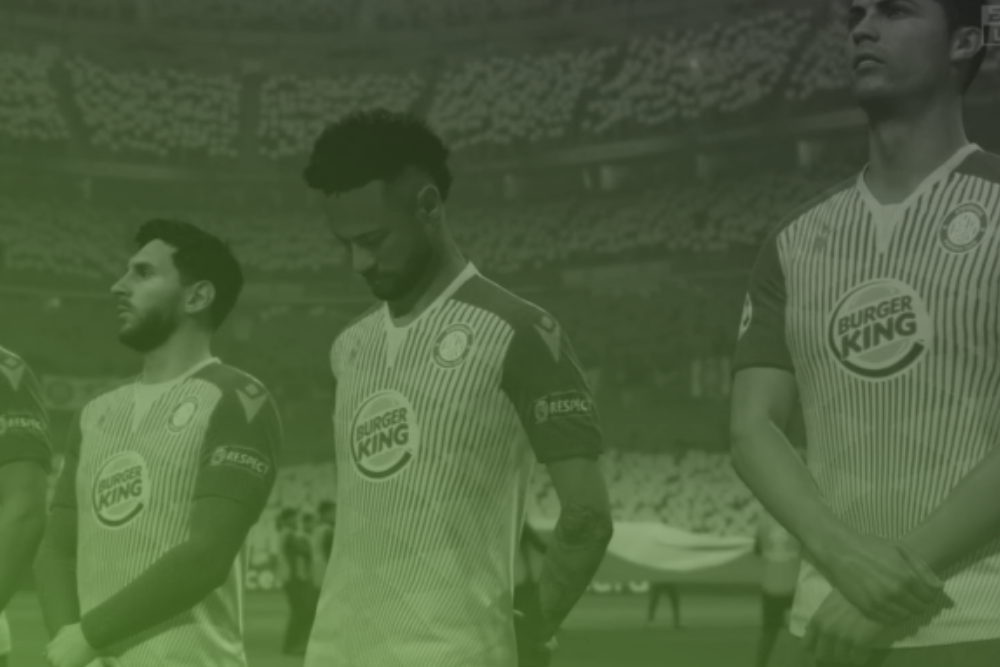 Marketing activations pop-up in surprising places sometimes, but a seriously untapped space is in a video game. Sure, we see sponsors going about in-game advertising in the same way they would in real life — having their logos on the side of courts and fields, on our favorite team’s jerseys — but there is so much potential of the virtual world left unused by brands.

One brand that has embraced the space better than most? Burger King. Burger King is taking video game marketing to a whole new level, finding creative and engaging ways to incorporate their brand into two of the world’s most popular video games: NBA 2K and FIFA. This piece breaks down both of those campaigns.

Burger King took the classic hit-a-shot-to-win-a-prize competition, and applied it to the virtual world. In NBA 2K21, a game that sold eight million copies in the first five months of its release, players can download “The Menu Court,” a BK-themed custom basketball court that features menu items like Whoppers, Fries, and Chicken Nuggets. Hit a shot from one of the items, tweet the clip to Burger King using #BKMenuCourt, and you’ve got yourself a free item.

Decked out in Burger King colors, the custom court looks hilarious, especially with players sporting matching jerseys. The marketing agency responsible for this campaign (David Madrid) demonstrated an exceptional knowledge of how the internet works, knowing that funny content like this has a lot of potential for virality and that gamers would respond to in-game contests.

The promotion was live through the beginning of April this year.

The story of this marketing campaign starts back in 2018 when Burger King became the official jersey sponsor for English League Two team Stevenage. League Two is a far cry away from the glories of professional soccer sponsorships. To give you some context, if a English Premier League Side got releagted three times, they’d be in League Two. Most clubs in League Two don’t even have jersey sponsors, but Burger King chose Stevenage nonetheless.

Their logic for the decision became clear later when they announced the #StevenageChallenge, encouraging the FIFA community to play with the team by letting them redeem free meals from Burger King for doing so. In the video recap of the campaign, Burger King is pretty straightforward about its intentions. “[Stevenage] would be in the same game that all the expensive players would be in,” the narrator said. “Because if we put our logo on their real shirt, we would definitely have our logo in the game.”

The results were pretty outstanding. 25,000 goals were shared online during the campaign, Stevenage was the most-used team in career mode, and the shirts sold out (in real life) for the first time ever. This campaign is a great example of employing some marketing chess moves — thinking multiple steps ahead — to get a great result.

The out-of-the-box thinking makes these marketing campaigns applause-worthy, but the way they’re having users interact with their brands also deserves some examination. A key to good marketing is meeting your audience where they already are, and Burger King is doing just that. Gaming has been on a steady rise for the past decade and, with many experiencing COVID-19 lockdowns, video game sales have surged heavily the past year. While Burger King may be one of the first to bring this level of creativity and attention to video game marketing, they definitely won’t be the last.