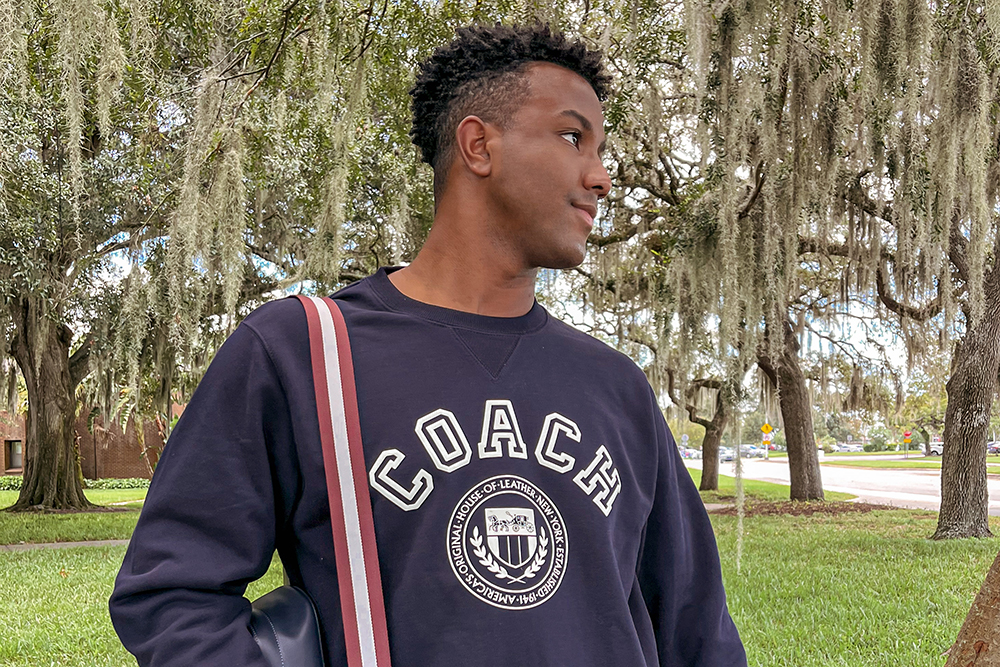 This was a long time coming for Cameron Baisden.

As he crafted content for an NIL partnership with COACH, the Central Florida cheerleader found himself thinking about personal growth. He retraced a winding journey backwards from this marquee brand deal through college to childhood.

Baisden reflected on life as the youngest brother in a family of athletes. By no fault of anyone in particular, he grew up in the shadows of older siblings, always striving for a bigger slice of attention.

So the caption came easily: “If someone would have told me ten years ago that I would be living out all of my dreams, I would have called them crazy!”

Knowing he would receive a flurry of congratulatory texts from friends and family shortly after he hit publish, Baisden remembered how a desire for external validation was once a central piece of his identity.

That’s why this one NIL deal carried so much weight. Baisden realized he was finally living out his dreams.

COACH is a well-established fashion brand with the power to launch massive marketing campaigns. But that pedigree brings a challenge: Its well-established target demographic skews older and toward women.

One solution is the brand’s new college ambassador program, driven by nearly 30 Gen Z microinfluencers whose campus-residing audiences prefer TikTok. As COACH developed a subset of new college-targeted products, though, they realized the ambassador group was missing something.

“That’s where we connected with Chase (Carriere) and brought MarketPryce into play,” Martinez said. “It was pretty seamless. … Compared to other processes – in a great way – it’s dumbed down. It makes it so easy and transactional. I thought it was great.”

About 140 MarketPryce athletes applied to help COACH launch the new line. With help from Carriere – who leads Brand Partnerships for MarketPryce – and a couple agents who represent athletes on the platform, the COACH team built a strong roster.

“We got some great athletes,” Martinez said. “We ended up with five really solid athlete ambassadors for the program.”

In a span of 18 days, COACH published its MarketPryce campaign, vetted applicants, finalized a roster of five and received approved content. That kind of production doesn’t happen without a stacked team.

Baisden went above and beyond, too, sharing additional content to his Instagram Story. The COACH team was ecstatic to know they found ambassadors who really aligned with their brand values.

Platt was the most engaging MarketPryce athlete. With more than 500,000 TikTok followers, he was a perfect fit for this campaign. He drove 7,300+ engagements across Instagram and TikTok – carrying an impressive 8 percent engagement rate on the posts.

In total, MarketPryce athletes drove 10,000 engagements and nearly 100,000 video views. And most importantly – they all told a compelling story.

Glover, for example, tied her video back to a photograph from seven years ago. She had just committed to play volleyball at SMU and posed in front of the iconic Mustangs statue on campus with her COACH purse.

“I've come so far,” Glover wrote. “And I can keep going with COACH by my side.”

MarketPryce empowers athletes and brands to grow through the power of partnerships. Want to work together? Hit us up.