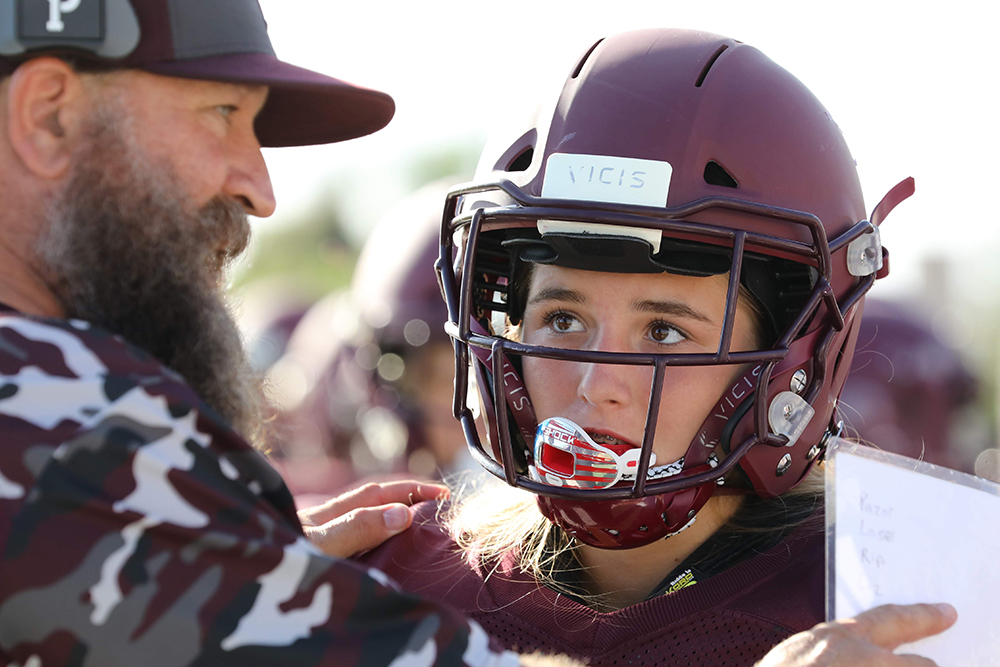 If Bella Rasmussen was ever put in a box, she looked for ways to break out.

At six years old, she realized a dream to follow in her brother’s footsteps and play football. Though the world casted doubt – even her supportive parents brought their fair share of skepticism – she pushed ahead. No flag football programs? Tackle it was.

She made history this Fall as a senior at Laguna Beach High School (Laguna Beach, CA), becoming the first girl to score two touchdowns in a varsity game. Bella Rasmussen? Don’t box her in.

“We tell girls at younger and younger ages that they have to be a certain way to appeal,” she said. “There’s a box we’re told to fit into. When I realized football wasn’t just fun, it would represent a change and a progression toward women being whatever they want to be?

Rasmussen received national coverage after the two-touchdown performance, bringing into stark relief the size of her new platform. Overnight, she became an icon for so many dreamers across the country.

Now, after a long playoff run with the Breakers, Rasmussen is leveraging her name, image and likeness for the first time through a long-term partnership with KeyWise AI. She announced the NIL deal during an interview on NBC Access Hollywood’s “Access Daily” show with Mario Lopez and Kit Hoover.

Much like she has as an athlete, Rasmussen wants to help people find their own path to better mental health. There is no room for boxes in this space, either.

“KeyWise is specified to you, instead of having people try to deal with mental health in a certain way,” she said. “Mental health is talked about a lot, but it’s not always clear how to solve the problems you have.”

“Bella and her family were not versed in all things NIL, but they had a clear vision for how they wanted to engage authentically within the space,” Ehrlich said. “After a deep dive on what is most important to their family, mental wellness and health was the obvious path to explore.”

They had no interest in becoming a billboard or partnering with brands that didn’t feel authentic to Rasmussen’s lived experience.

When Ehrlich introduced KeyWise AI, a brand set to launch its first MarketPryce campaign looking for athletes who were invested in the mental health space, the fit was obvious.

Ehrlich said the timing for this authentic, long-term partnership could not have been better.

“I’ve been around the negative impacts of mental health for so long,” Rasmussen said. “I didn’t like how it was impacting the people around me, the people I love. When this all came to be, and I had this opportunity to partner with KeyWise, I realized: ‘Wow.’ I could help way more than the one person in my family, or the one friend who’s fighting depression. I can reach people throughout the country.”

KeyWise AI’s new app uses typing patterns on smartphone keyboards to help users recognize when they could use a little extra support. One of the app’s leading features, called Care Circles, allows friends, family, coaches and teammates alike to join a private group that receives alerts during such times.

The goal? Breaking down the stigma around asking for help.

“We were inspired by Bella’s story and her authenticity,” said KeyWise Co-Founder Raeanne Moore. “She expressed a desire to use her platform to discuss her own mental health journey and inspire others on their personal journeys.”

What’s next for Bella Rasmussen?

After the division championship celebration –  Laguna Beach's first since 1946 – Rasmussen is set on continuing to make the most of her platform.

From the KeyWise partnership to local activations with the Los Angeles Chargers – including hitting the field at SoFi Stadium for their upcoming Battle of the GOATs Celebrity Game – and everything in between, Rasmussen has kept busy. In her downtime, she’s submitting applications to study psychology in college.

“I have a platform to talk about way more than football,” she said. “I can make a real impact on people’s lives and create something that hasn’t been done before.”