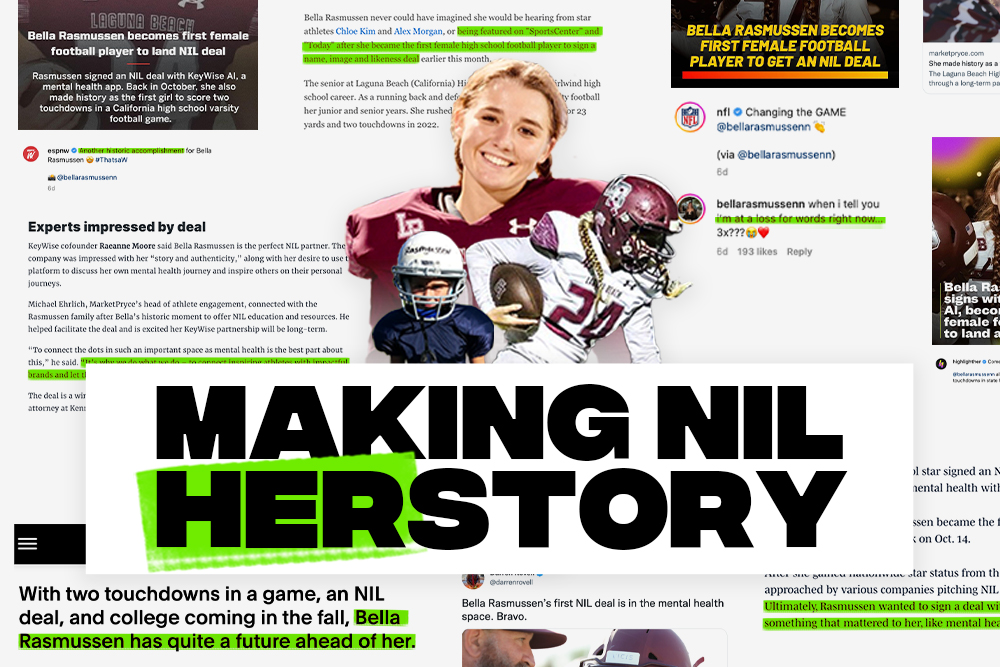 After she announced an NIL partnership with KeyWise AI on Access Hollywood, interview requests poured in. More than 24 national brands and media outlets covered her story. The NFL, On3 NIL, ESPN, BoardRoom, Overtime, MaxPreps, Front Office Sports, highlighther, Togethxr and others wrote stories and shared social media posts that generated tens of thousands of interactions.

"I honestly couldn't have ever imagined that my life would be where it is right now," Rasmussen told ESPN. "It was getting so much attention from people I never, ever could have dreamed of hearing from and it's just been so crazy to see where the platform is being taken right now."

Michael Ehrlich, MarketPryce’s Head of Athlete Engagement, reached out to Rasmussen after she made history – the first time – by scoring two touchdowns for the Breakers’ varsity squad in October.

As a Girl Dad and longtime sports industry pro, he was moved by Rasmussen’s story. Ehrlich congratulated her on the achievement and asked if he could be a resource in the NIL space.

Rasmussen responded almost immediately and set up a call between Michael and her mother.

“Her mom actually didn’t know what NIL was,” Ehrlich said. “It was great to educate her on the rules and what’s possible.”

Rasmussen’s parents did not want her social media feeds to look like an e-commerce store or a spammy shopping cart. If their daughter was going to work with any brand, it had to be an authentic fit.

Ehrlich learned about what drove Rasmussen off the field. She is retiring from football – unless a college team comes calling – and plans to build on a passion for mental health by studying psychology.

“The lightbulb went off,” he said. “I knew KeyWise was about to launch a MarketPryce campaign.”

KeyWise AI’s new app uses typing patterns on smartphone keyboards to help users recognize when they could use a little extra support. One of the app’s leading features, called Care Circles, allows friends, family, coaches and teammates alike to join a private group that receives alerts during such times.

“What set this story apart from everything else out there, is that it was rooted in mental health and wellness,” Ehrlich said. “But it was also rooted in giving back, helping others and providing tools that other high school students, athletes, and honestly the general population can use.”

Since the announcement, Rasmussen played in the Los Angeles Chargers' celebrity All-Star game (tallying one sack and one touchdown), gained nearly 8,000 followers on Instagram and went viral with a wholesome TikTok about her journey.

Who knows what she'll dream up next.

‍MarketPryce empowers athletes and brands to grow through the power of partnerships. Want to work together? Hit us up.