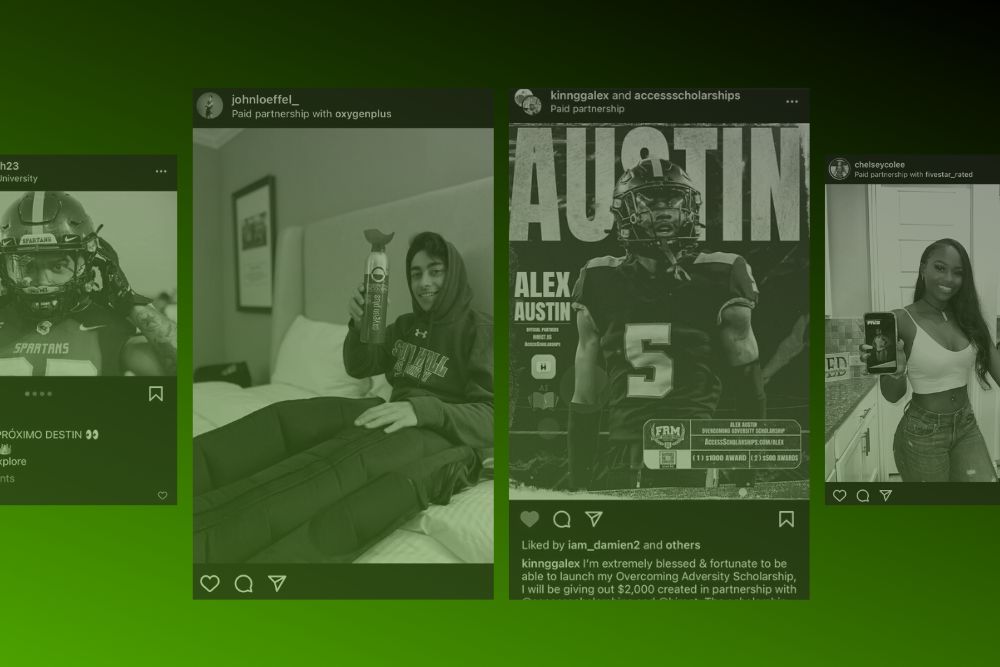 It has been a sprint in the year since NCAA v. Alston, as student-athletes built their brands, researched NIL partnerships and made sure it was all compliant.

At MarketPryce, our mission is to empower people to connect, create and grow – one partnership at a time. As former athletes, agents and creators, it’s been a thrill to see how college athletes across the landscape made the most of their NIL rights in Year 1.

Here are 12 of our favorite partnerships powered by MarketPryce:

Alex Austin connected with Access Scholarships and Hirect through MarketPryce and launched a scholarship in his name.

Smith, the esteemed King of NIL, partnered with GuardLab and landed some free product.

Smith landed so many brand deals that he's now seen as a leader in the space, earning the Hustle Award at the inaugural NIL Summit. We're proud to be a small part of his success in Year 1.

Cam Baisden partnered with Bonfire to launch his own clothing line. He’s quickly built a supportive community excited to follow along as he Goes Where He Feels Most Alive.

The MarketPryce Athlete Strategy team worked closely with Cam ahead of this launch. We couldn't be more proud of his growth and early success.

Keeley Davis landed more than $1,000 worth of free merchandise in her first two months on MarketPryce. She leveraged her following of Creighton Volleyball fans in conversations with 18 brands. One of those led to this clean • simple • effective agreement with Humble Brands.

Davis underscores how easily any athlete can put themselves in front of brands and make deals if they're committed to put in the time.

Jake Ferri, Kent State wrestling icon, brought perfectly self-deprecating humor to this deal with Tiege Hanley. "If you're a disgusting human being such as myself and like spending all your time on a dirty mat, this stuff will help keep your face real clean."

Dukes, the first HBCU athlete to work with Bojangles, has branded himself as a leader in the space and worked hard to keep the deals coming. He made several connections with brands on MarketPryce, including a spot alongside Ferri this campaign.

Whitaker is one of MarketPryce’s most active users and helped establish our community of athletes making the most of their NIL opportunities. We loved seeing her kick off a campaign with her little bit of Project Repeat nostalgia.

John Loeffel, a Seton Hall track and field athlete, posted about Oxygen Plus four times before they worked with him. Because of his passion, they sent him multiple cash deal offers including a podcast appearance that grew into a months-long paid partnership.

He showed how consistent effort can lead to a mutually beneficial relationship.

Vanessa Pearl elevated her partnership with Go Heart by donating 30 percent of the proceeds to a rescue that re-homes dogs where she volunteered in high school.

The Florida swimmer found a seamless way to build her brand as an empathetic and kind athlete while also giving back.

Remember when we said Dukes put in the work? He’s back here on our list with another great brand deal – we liked it so much it’s the thumbnail image on our site.

This content from Cole is a reminder your brand post doesn’t need to be highly polished. She showed off her Lily Trotter compression sleeves in action with a series of flips in front of the skyline – short, sweet and still scroll stopping.

The kind of effective and minimally produced cash deal you love to see.

Louisville football’s Jalen Mitchell joined Cole and others in this paid campaign with Fivestar App. This campaign paired that unpolished phone content with custom graphics showing the players in Fivestar gear.

Derek Blackmore was one of more than 100 athletes who signed with GOAT Fuel in the brand’s first two months on MarketPryce. That was one of his first NIL opportunities and more recently, he’s put out incredible content with Mine Baseball.

The grind doesn't stop. See you in Year 2.